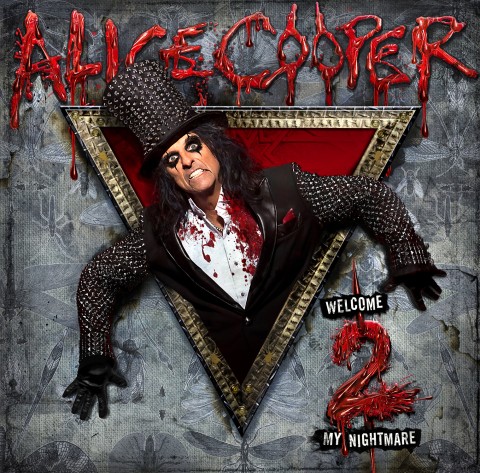 This review is for the Universal: Exclusive Limited Edition. I haven’t bought the last few albums with Alice on the release day. I was so disappointed with The Last Temptation and Brutal Planet that I thought he’d lost his touch. But a few months, or even a couple of years ago, I started to write a complete discography on all the albums, the initial band era and Alice’s solo material. It’s only available in Swedish I’m afraid but it might be understandable with Google translate or some other translation tool out there if you’re Swedish isn’t up to date. I learned a lesson and realized that I would never skip an Alice album ever again. I pre-ordered this!

So, was I disappointed with this? On the contrary in fact! It’s a very well written album and it winks and blinks at the original quite a lot. I really like that approach but on the other hand I feel it’s somewhat tragic too. I mean, why incorporate old melodies into this. Isn’t this album good enough to stand on its own? It really is, but the borrowed music from the thirty year old Welcome to My Nightmare really takes it to the next level! The songs aren’t as obvious nightmarish this time but the lyrics might be interpreted in several different ways, at least some of them like the opening I Am Made of You which could be about just anything. It’s a very clever lyric where the solution to the riddle might be a metaphor on its own. It took me a couple of sessions for me to realize that but that’s the way things are with greatness!

Last Man on Earth reminds me of the Sci-fi classic The Quiet Earth! It’s a genius nightmare theme really, what would you do if you really were the last person on earth? Would you be a beggar or a king? No one to correct you of course and it might feel like a kingdom at first until the loneliness gets you. I have not seen the Vincent Price movie Last Man on Earth, but if I know Alice as good as I think it might as well be that movie which inspired the song or by something completely different of course. Music and lyrics are made for interpretations!

As a fan of the original band I’m pleased to say that the original members (except Glen Buxton of course R.I.P.) are on the album. They have also contributed to the songs and Bob Ezrin, who produced the original, are back! It’s an album with great and varied tracks. Some are very true to the original sound and some are quite modern. There’s a cool little song – Disco Bloodbath Boogie Fever, which kind of reminds me of Eddie Meduzas Disco Tjo, at least in the chorus. I realize of course that most of you won’t have a clue who and what I’m talking about. Only Swedes might understand this part [so why did I include it?].

If you ignore all different versions of the album, each with its own set of bonus tracks; it all ends with a very cool little instrumental piece. It’s kind of a potpourri of the entire Welcome to My Nightmare album, bits and pieces wielded together – very cool! The bonus track on the version I have and which I’ve reviewed is a great song called Under the Bed. It’s a retrospective pieces with the original album in mind. That’s my interpretation of it anyway: Save me/I can’t take any more/Coz it’s happening again/I’ve had this nightmare before/And I know how it ends.

It also includes a magazine, an Alice mask and some poster stuff which makes it even more price worthy. This is a great album from a great artist! But I’m a bit unhappy with all the different version of the album, It feel like the record company want to squeeze out every single cent of it. The major fans, such as myself, that won’t stop at nothing to get a complete set of songs has to get several versions and that’s no good! A regular version and a deluxe edition with bonuses would have done, no more!

EVERYONE loves this ULTRA-violent movie!

The second movie is even more SADISTIC

Might be the BEST ALBUM of the YEAR for me!

This PUNK album isn't half bad!

Can a METALHEAD dig in to a COUNTRY album?

This website uses cookies to improve your experience while you navigate through the website. Out of these cookies, the cookies that are categorized as necessary are stored on your browser as they are essential for the working of basic functionalities of the website. We also use third-party cookies that help us analyze and understand how you use this website. These cookies will be stored in your browser only with your consent. You also have the option to opt-out of these cookies. But opting out of some of these cookies may have an effect on your browsing experience.
Necessary Always Enabled
Necessary cookies are absolutely essential for the website to function properly. This category only includes cookies that ensures basic functionalities and security features of the website. These cookies do not store any personal information.
Non-necessary
Any cookies that may not be particularly necessary for the website to function and is used specifically to collect user personal data via analytics, ads, other embedded contents are termed as non-necessary cookies. It is mandatory to procure user consent prior to running these cookies on your website.
SAVE & ACCEPT